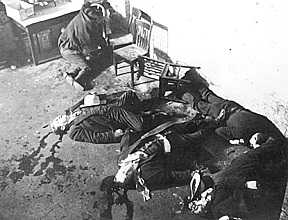 The Saint Valentine's Day massacre is the name given to the shooting of seven people [six of them gangsters] as part of a Prohibition Era conflict between two powerful criminal gangs in Chicago, Illinois in the winter of 1929: the South Side Italian gang led by Al Capone and the North Side Irish/German gang led by Bugs Moran. Former members of the Egan's Rats gang were also suspected to play a large role in the St. Valentine's Day massacre, assisting Al Capone.

On the morning of Thursday, February 14,1929 St. Valentine's Day, six members of George 'Bugs' Moran's gang and a mechanic who happened to be at the scene were lined up against the rear inside wall of the garage of the SMC Cartage Company in the Lincoln Park neighborhood of Chicago's North Side. They were then shot and killed by four members of Al Capone's gang [two of whom were dressed as police officers]. When one of the dying men, Frank Gusenberg, was asked who shot him, he replied, "Nobody shot me." Capone himself had arranged to be on vacation in Florida at the time.

The St. Valentine's Massacre resulted from a plan devised by Al Capone and various members of his gang, foreplay Jack "Machine Gun" McGurn, Fred "Killer" Burke, and Fred Goetz, to eliminate Bugs Moran, the boss of the North Side Gang and Capone's main rival. The massacre was planned by the Capone mob for a number of reasons; in retaliation for an unsuccessful attempt by Frank and his brother Peter Gusenberg to murder Jack McGurn earlier in the year; the North Side Gang's complicity in the murder of Pasqualino Lolordo, as well as Bugs Moran muscling in on a Capone-run dog track in the Chicago suburbs. Also, the rivalry between Moran and Capone for control of the lucrative Chicago bootlegging business led Capone to accept McGurn's plan.

The plan was to lure Moran and his men to the SMC Cartage warehouse on North Clark Street. For decades it has been assumed that the North Side Gang was lured to the garage with the promise of a cut-rate shipment of bootleg whiskey, supplied by Detroit's Purple Gang. However, recent studies indicate this was almost certainly not the case. All seven victims [with one exception] were dressed in their best clothes, hardly suitable for unloading a large shipment of whiskey crates and driving it away. The real reason for the gang gathering in the garage will probably never be known, but it almost certainly wasn't to receive a load of Purple Gang booze.

A four-man team led by Fred "Killer" Burke would then enter the building, two disguised as police officers, and kill Moran and his men. Before Moran and his boys were set to arrive, Capone placed lookouts in the apartments across the street from the warehouse. Wishing to keep the lookouts inconspicuous, Capone had hired two thugs, Byron Bolton and Jimmy Morand. Mug shots of Purple Gang members Eddie Fletcher, Harry Keywell and his brother Phil, were later picked out by the landlady across the street as the phony roomers. Later, the women who identified them wavered, and both Fletcher and Harry Keywell were cleared by Chicago police. Nevertheless, the mistaken idea that the Purple Gang played a part in the massacre would last for decades.

At around 10:30 on St. Valentine's day, four members of the Burke gang drove to the warehouse in two cars; a Cadillac sedan and a Peerless, both outfitted to look like detective sedans. Two men were dressed in police uniforms and two in street clothes. The Moran Gang had already arrived at the warehouse. However, Moran himself was not inside. One account states that Moran was supposedly watching the warehouse, spotted the police car, and fled the scene. Another account was that Moran was simply late getting there.

Byron Bolton confused one of Moran's men for Moran himself; he then signaled Burke's men they approached the warehouse. The two phony cops, carrying shotguns, exited the Peerless and entered the warehouse through the two rear doors. Inside they found six members of Moran's gang and a seventh man who was actually a mechanic fixing one of the cars, and not a gangster at all. The killers told the seven men to line up facing the back wall; there was apparently no resistance, as the Moran men thought their captors were real cops.

Then the two "cops" let in two men through the front door facing Clark Street. This pair, riding in the Cadillac, were dressed in civilian clothes. Two of the killers starting shooting with Thompson sub-machine guns. All seven men were killed in a storm of seventy machine-gun bullets and two shotgun blasts according to the coroner's report.

To show by-standers that everything was under control, the pair in street clothes came out with their hands up, led by the two uniformed cops. The only survivor in the warehouse was John May's Alsatian dog, named Highball. When the real cops arrived, they first heard the dog howling. On entering the warehouse, they found the dog trapped under a beer truck and the floor covered with blood, shell casings, and corpses. The victims were identified as James Clark [AKA Albert Kachellek], Frank Gusenberg, Peter Gusenberg, Adam Heyer, John May, Reinhart Schwimmer, and Al Weinshank.

Commenting later on the massacre, Capone reportedly said "I don't give a damn killing those people."
Aftermath
The St. Valentine's Day Massacre marked the beginning of the end to Moran's power. Although Moran suffered a heavy blow, he still managed to keep control of his territory until the early 1930s, when control passed to the Chicago Outfit under Frank Nitti. The massacre also brought the belated and full attention of the federal government to bear on Capone and his criminal activities.

Police eventually charged Capone gunmen Jack McGurn and John Scalise with the massacre. Scalise was murdered before he went to trial and the charges against McGurn were downgraded to a violation of the Mann Act, stemming from taking the main witness against him, girlfriend Louise Rolfe, across state lines to marry. McGurn would beat the charges.

In 1931, Capone was convicted of income tax evasion and went to prison for 11 years. The massacre no doubt took down both Moran and Capone and left the bloody turf war they had with each other with a stalemate. As for the triggermen, Fred Burke got off the easiest; sentenced to life in prison for the murder of a Michigan cop, he died of heart disease in 1940. His helpers, like him, former members of a St. Louis based gang named Egan's Rats, were murdered in various situations within just five years or so of the massacre.

The garage, which stood at 2122 N. Clark Street, was demolished in 1967; the site is now a landscaped parking lot for a nursing home. The wall used for the shooting was dismantled brick by brick, sold at auction, and shipped to George Patey of Vancouver, a Canadian businessman. Patey used these bricks in the men's restroom wall of the Banjo Palace, a bar with a Roaring Twenties theme. After the bar closed, Patey began trying to sell the bricks as souvenirs.

The two submachine guns used in the massacre, seized by police when Fred Burke shot and killed Charles Skelly, a policeman in St. Joseph, Michigan, are currently being held in the Berrien County Sheriff's Department in Michigan.
Fictional depictions and allusions
♡ At the Disney MGM Studios' Great Movie Ride attraction a set of the ride is Chicago in the 1920s where a shootout takes place. One of the gangster's cars has a license plate of 021429, the date of the St. Valentine's Day Massacre.

♡ The massacre was used as a plot device in the 1959 film Some Like it Hot and was the subject of Roger Corman's 1967 film The St. Valentine's Day Massacre.

♡ The TV series Early Edition included a final season episode named “Everybody Goes to Rick’s” whose story was based around this event.

♡ It also gave its name to WWF St. Valentine's Day Massacre, a pay per view event held in 1999.

♡ In an episode of The Simpsons aired October 10, 1991, there is a reference to the massacre when Bart shows Fat Tony an Itchy & Scratchy cartoon where Itchy lines up a bunch of cats in front of a wall and shoots them with a machine gun. Fat Tony then replies [laughing] "It's funny because it's true." And the character of Johnny Tightlips, who hardly gives any information to anyone, even his own gang, is based on Frank Gusenburg. His catchphrase is "I ain't sayin' nothin'," which he says even after he has been shot by a stray bullet, and was asked where it hit.

♡ In an episode of the TV show M*A*S*H, the staff of the 4077th are trying to pick a date that their families can get together for a party back home. Someone suggests Valentine's Day and Dr. Charles Emerson Winchester sarcastically replies: "Perfect, they can meet in a garage in Chicago!"

♡ The 1991 movie Oscar, starring Sylvester Stallone, includes a reference to the massacre as well. Stallone plays "Snaps" Provolone, a prominent gangster in Chicago in 1931. In a scene early in the movie, his accountant reminds him, "You were in Chicago... It was Saint Valentine's Day," at which Stallone and one of his goons exchange a knowing smile and a chuckle.

♡ The nickname of the "St. Valentine's Day massacre" has also been used to refer to the sixth, and final match-up, between boxers Sugar Ray Robinson and Jake LaMotta. This is due to the fact that it took place on Valentine's Day in 1951, and because of the beating that LaMotta took, which caused the fight to be stopped in the 13th round.

♡ In the web comic Sluggy Freelance, a Valentines Day card is given to Zoe that says "Happy Saint Valentines Day... Massacre!" The card also has a depiction of bun-bun with a machine gun and several blood stains on a brick wall.

♡ In a Calvin and Hobbes comic strip, Hobbes teases Calvin about liking Suzie while Suzie walks up and yells at Calvin for sending her a mean Valentine. Calvin says, "I'd say we're about due for another Saint Valentine's Day massacre." [encyclopedia.tfd.com 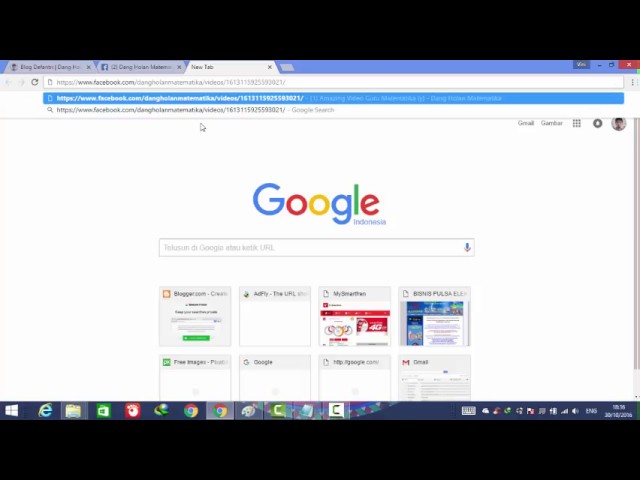